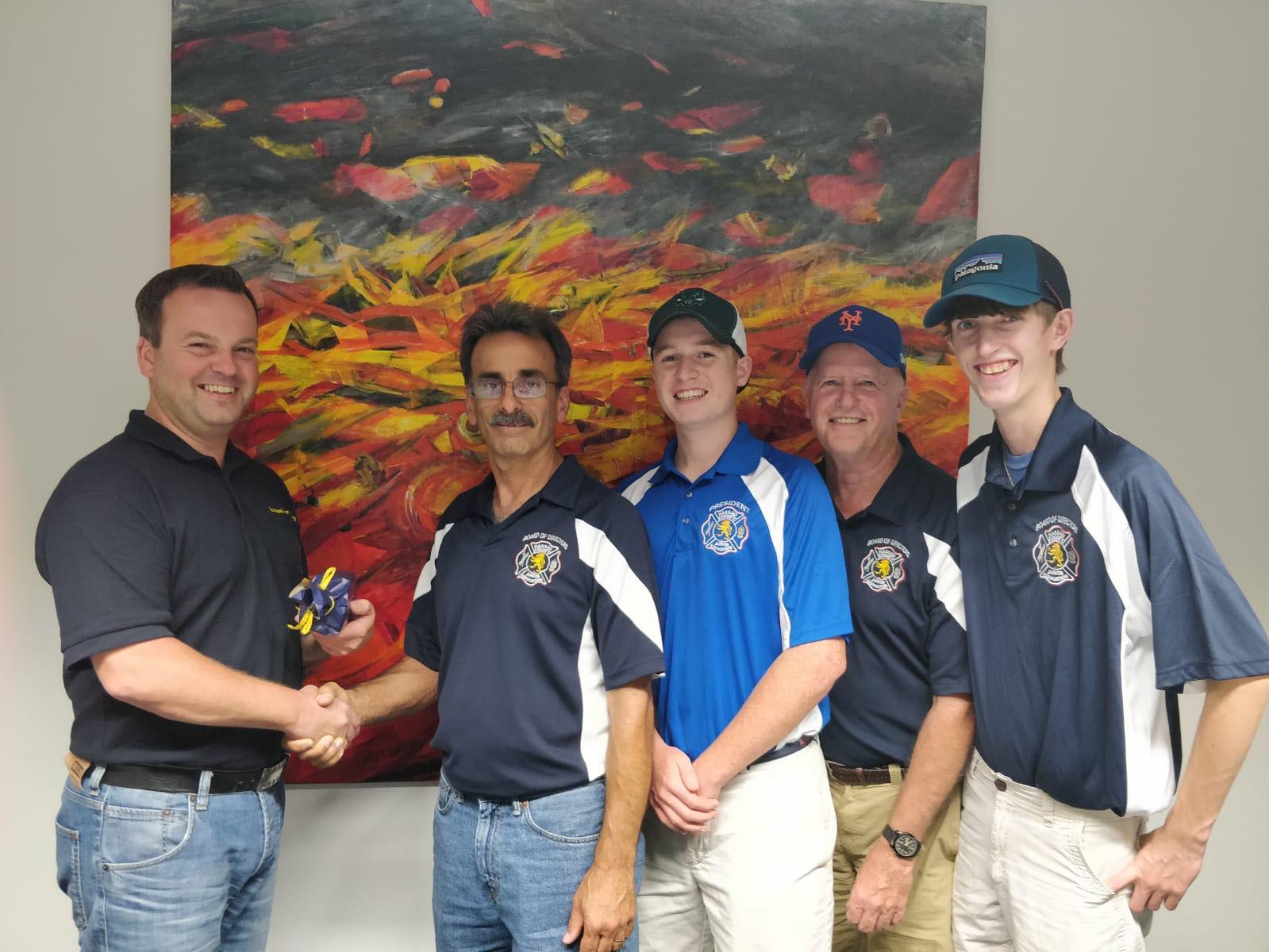 On Friday, August 17th of 2018 Chairman Gerard Presta, Vice Chairman Mike Scanlon, President Robert Dowd, and Board member Michael Scanlon of the NCJFA all embarked on a weeklong journey to Germany that had been in motion for years. After first being contacted by Benno Graze of Korb, Germany over 3 years ago the NCJFA and its members began building relations with various youth groups from around Germany. After having 3 youth group Advisors visit in May of 2018 the NCJFA decided that it was time to visit Germany with hopes of learning more about their youth program and setting up an international exchange program for the Associations annual Camp Fahrenheit 516. With all expenses paid out of each board members pocket they took flight and visited Germany from August 17th-23rd. They were able to travel around the majority of the country and along the way visited aver 10 Fire Houses each with their own youth program.

Today, we arrived at Frankfurt international airport where we were met by our good friend Marcel. We then set out for Burgstadt where we checked into our Hotel and visited the Limbach Volunteer Fire Department where we were given a tour of the fire house along with a ride on their aerial ladder. We learned a lot about their Youth group from the tour. Their youth group is for children 6-16 and they meet twice a month. They also currently have 10 members. After leaving Limbach, we drove to the Oberfrohna Volunteer Fire Department where their youth members demonstrated the skills they learned while in the program. We also had the opportunity to speak with their youth leader and enjoyed a traditional German barbecue at the fire house.

Today we started off by stoping by the Oberfrohna fire Department and once again thanking them for their hospitality. We then started our next Journey to Berlin where we visited the Lechtenrade volunteer fire department. While we were visiting there was also an alarm that the volunteers responded to. It was extremely interesting to see the similarities and differences compared to volunteers responding in the United States. We then headed to the Reichstag where we had a Skype meeting with junior groups from all around Nassau county. After the meeting we were able to tour the Reichstag and learn more about its history. We also visited the United States Embassy, the Holocaust memorial, the Brandenburg Gate, the Berlin Wall, Tempelhof, the Berlin Broadcasting tower, the world time clock. and the Soviet War memorial. Today we will be traveling to Haverlah to present to their youth Group about the fire service in the United States.

Today we had a little spare time to observe some scenery around Germany before stopping by the Wolfenbuttel Fire Department. We walked across Europe’s longest suspension bridge and took a cable car to the overlook of Bad Harzburg. We were then treated to a traditional Bavarian lunch. After lunch, we arrived at the Wolfenbuttel Fire Department where we met with their youth leader, took a ride in their tower ladder, and observed their youth group training on hose advancement. We then went to the Haverlah Fire Department where we presented a PowerPoint on the US fire service and the Nassau County Juniors Program. We also met with many of the youth leaders of surrounding departments to discuss our programs. To show our thanks that the Haverlah Fire department for their hospitality, we presented them a plaque of appreciation and thanks.

Today we visited Stadt Salzgiter, a paid fire department for our first time in Germany. We also visited a German Fire Museum were we received an all access tour the oldest artifact was from 1632 - Present. This included a lot of historical artifacts from World War II. Finally, we traveled 5 hours to Korb Germany where after 3 years we finally met face to face with our first contact ever in Germany. We were treated to a traditional German dinner by the Korb Fire Department to end the evening.

On our last day in Germany we had a very relaxing day. We started off with a traditional German breakfast outside Korb’s main fire house. After our breakfast, we headed over to the Mercedes museum where we toured and learned more about the historic cars made in Germany. We then toured a career fire department one town over from Korb. We discussed the importance of their youth group that has a portion of 144 Juniors in their entire county. After the tour, we once again had a traditional lunch outside the fire house and were fitted for gear for what was to come next. We learned about German firefighting tactics and were able to participate in a training. We stretched hose lines, secured a water source, and flowed water to simulate putting out a fire. After the training, we showered up and headed to tour Korb’s substation then to dinner where we barbecued sausage and pork belly on top of a mountain surrounded by vineyards and breathtaking views. At the end of the night we presented our friend Benno along with the Chief of Korb a plaque as a token of our appreciation for their hospitality. When all was said and done we did not say Goodbye but instead “see you later” because we know that the newfound friendships made from this journey will continue on and last a lifetime.

As we head home we look back on our 5 days and realize how much we have covered; from meeting with 10 departments throughout Germany and having discussions about their junior programs, to looking at different training techniques, to comparing different apparatus and equipment, but The Most important was our meeting and discussion about starting an exchange program between the US and Germany. Throughout the time we were here we had the opportunity to meet new people and what started out as a business trip turned out to be a great connection of friendships that will last forever. We are grateful for this opportunity and we enjoyed the time spent in this country and with the wonderful people we met. We look forward to working together on these upcoming projects for major success between both countries- The officers and Board Members of the Nassau County Junior Firefighters Association